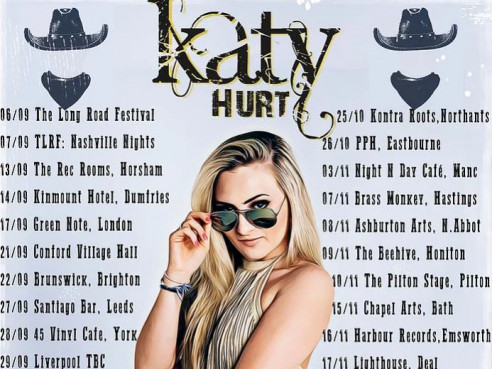 Don't miss our December session Live at The Old Stables!

Don't miss our December session Live at The Old Stables!

Katy Hurt is one of those rare talents that can write and perform with equal impact. Her 2019 single Revved Up prompted Roland Monger, Music Blogger, to say “Hurt’s voice takes Dolly Parton’s twang and Beth Ditto’s soul, wraps it all up in a basket with a bow before setting fire to it and leaving it on your door step.”  Steeped in country roots, but never one to simply yield to the traditional Nashville sound, Katy stretches the country music genre in exciting new directions. Haunting blues vocals, towering country rock guitars, even a reggae vibe can be found in live performances.

Combining the old with the new, traditional with the modern, Katy manages to seamlessly weave together two sounds that are believed by some to be diametrically opposed. The current debates around what constitutes “real” country music become rather superfluous when listening to Hurt. With a voice undeniably influenced by the first ladies of country – Parton and Cline among them – but with a desire to draw on the sounds of contemporary rock and pop, Hurt achieves the seemingly impossible on her latest release, Unfinished Business – staying true to country music’s roots whilst embracing a more mainstream sound.

Support for Katy is being provided by Grainne Hunt.  Grainne is a contemporary folk singer and songwriter, raised in Monaghan and living in Kildare. With consistently on-point, captivating vocals and well-honed, insightful songs, Grainne has shared stages with Glen Hansard and Mark Geary and has been compared to vocal icons Tracy Chapman and Nathalie Merchant.