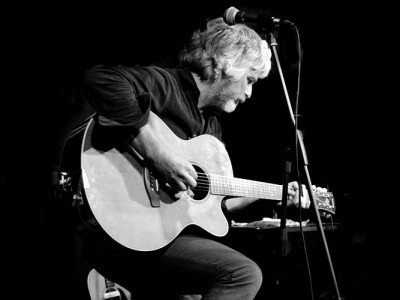 Don't miss this fantastic session, Live at The Old Stables!

This is another very special night for The Old Stables. We are so thrilled to welcome back the hugely respected and hugely talented, Mercury Music nominated, John Bramwell.

John has been the frontman and singer/songwriter of the band I am Kloot since its birth in 1999. In that time they have garnered major critical acclaim; retained a cult status; and developed a legion of devout fans dedicated to spreading the gospel of I am Kloot. Among their many highlights they picked up a Mercury Music Nomination for their album Sky at Night and a number 10 entry into the UK Album Charts for the studio album, Let It All In.

Since then, John has been performing an exclusive set of intimate solo gigs at some of the country's best loved venues and going back to his roots and entertain smaller audiences.

John's album, 'Leave Alone the Empty Spaces,' was released last year to critical acclaim.  Work on his new album is well underway and is due for released later this year.

John will be performing songs from this album as well as many I am Kloot classics.

With these recordings and a bag of classic songs and great stories, John Bramwell brings poetry, great guitar playing, a beautiful, unique voice and (as everyone who watched John at The Old Stables last year will agree...)  just a little chaos...

“Utterly compelling, quite beautiful and frequently hilarious" – The Guardian

And joining John, we'll be welcoming back the very talented Dave Fidler.  Dave is a singer songwriter from Manchester will a lovely, mellow touch and will be not only supporting John, but will also be accompanying him on stage on bass guitar and harmonies.